Alternate Title: Why Can’t You Ever Pick an Easy Project?

This post contains affiliate links. If you buy a product I link to, I get a small (and I do mean small) commission at no extra cost to you. Amazon gets a little less, and I can, in theory, make back some of the costs of my materials that ended up being useless (here’s looking at you, ‘rotary cutting tool’ from Michael’s). 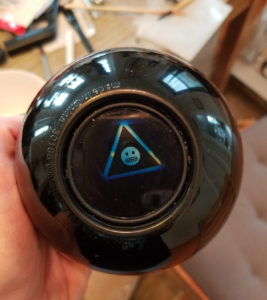 Not long after meeting my boyfriend, I knew I wanted to make him a custom Magic 8 Ball. There are many awesome, thoughtful gifts you can buy, but sometimes I just can’t resist a good DIY project.

Here’s how I went about pulling it off.

1. Get yourself a Magic 8 Ball

First, buy a Magic 8 Ball. Amazon sells them Prime for like $9. (link)

I learned this is called a D20. I got the ‘jumbo’ 32mm size, and that worked great. Turned out to be almost exactly the size of the one that was inside.

I also got a 4-pack and was glad I did because I ruined 2 of them.

I’m linking to the search for a blank D20 die on Amazon because inventory changes a lot on Amazon but someone’s always selling ’em (link).

Come up with the 20 responses you’ll want in your Magic 8 Ball. I knew I wanted to go traditional – 10 positive, 5 neutral, 5 negative. I thought of inside jokes, things he says a lot, emojis he likes, etc. I threw in “It is known” because he’s a huge Game of Thrones fan.

4. Lay them out in Photoshop or whatever

I decided on black triangles with white text. If I had to do it again, I might do the opposite. Here’s my template file you can mess with. (template file psd) 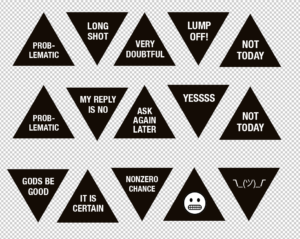 Print them with a laserjet printer on good quality adhesive paper. I went with these large, 3.5″ x 4″ address labels because they were cheap and they claimed to be “permanent.” (link) The important thing here is there are 6 labels on the page and my template was designed with that in mind. If you end up buying different ones, just adjust the template accordingly.

I thought that sanding the die down a bit might make the labels stick better on the smoothness of the die, so I did that. I used one of those multi-sided nail buffer things because I don’t own sandpaper.

7. Cut and stick your labels

I found it a lot easier to peel the label first and then cut out the triangle, rather than cutting out tiny triangles and trying to peel off the adhesive backing.

It was a painstaking hour, but eventually I had myself a nice looking die. 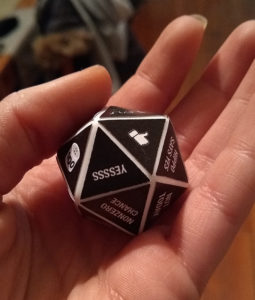 Luckily, the liquid inside the Magic 8 Ball was a hell of a lot less caustic than the 91% isopropyl alcohol I was using for my test runs.

This step requires a great deal of patience (and time). I’d apply thin coat after thin coat, allowing at least 6 hours of drying time in between, rotating the die and adding more coats until it was all covered. Aim for many thin coats. This makes for easier and more thorough drying, and avoids drips/pooling. I used a bent metal cap to prop up the die for painting/drying. The cap was handy for catching inevitable drips.

9. Opening up the godforsaken Magic 8 Ball

Boy, do I have a newfound respect (fear) for the strength of plastic. It really is going to kill us all. The 8 ball is a mostly hollow piece of plastic with a cylinder inside that contains the ink/die. I read it was about ¼” thick and that a Plexiglass cutter would work (it did not). I mostly just made a mess and gave myself a blister. 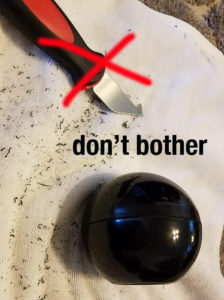 Before I realized the Dremel thing, I’d gone to a lumber yard where a nice man took pity on me and cut it open with relative ease using a hacksaw while I looked on with my mouth hanging open. If you’re comfortable with a hacksaw, go to town. (link for hacksaws)

Now we’re getting to the heart of things. This is where it gets messy. Get yourself some latex gloves because you really have no chance in hell at not getting ink all over the place, even if you’re being really careful. As you can see here, there’s ink all the way up to the top.

Before you open this baby up, you need to get the liquid out (Just remove all of it. More on why later.). This involves removing the three Phillips head screws at the top of the cylinder, using a flathead to pop out the stopper (as pictured), and tap, tap, tapping until it’s empty and all you have left in there is the original 20-sided die.

…in this whole project was getting to this part and realizing, stupidly, that the super cool custom D20 I made DID. NOT. FLOAT.

Of course it wouldn’t. It’s heavy. It wasn’t even floating in my test runs. What the hell was I thinking?

I about gave up at that point. I reasoned, “WELL. He’ll just have to look at it while he’s lying on his back on the couch.”

And then I remembered that salt creates buoyancy. This is why I said to just remove all the liquid from the 8 ball — because I ended up having to. I dropped my custom D20 into the liquid I removed from the 8 ball and added table salt until it floated up to the top, at which I breathed a huge sigh of relief. Later on, you’ll pour this salty brew back into the cylinder, so it, uh, works.

12. Use your Dremel or a hacksaw to open up that cylinder

It is not easy. I used a “junior” hacksaw and it took a LOT of work and prying with a flathead screwdriver to get that dratted thing open. Once you’ve got it, take out that plastic bobber thingie, remove the old D20, and pop in your new one. You’ll replace the liquid in a later step.

Note: when you do this, there won’t be any dye in there as pictured below. You’ll have removed it in step 9.

13. Use epoxy to reseal the cylinder

Go around the perimeter of the cylinder with epoxy to seal it up. And use a lot of it because you need to make sure you fill in for all the material you removed when you were sawing it open. And it MUST be watertight. I used the Gorilla Glue 5 minute set epoxy (link) — just get two of these because one was very nearly not enough.

Once it’s good and dry (I gave it an hour even though it says it sets in 5 minutes), I gave it another go-around with epoxy to make I created a watertight seal.

14. Pour in your salty brew

Now that you’ve got a watertight seal, it’s time to pour the salty dye back into the cylinder. This was super messy and a pain. I don’t have a funnel small enough to fit the hole so I made one by cutting the bottom off a plastic cup and bringing together the sides of the cup. You have to pour verrrryyy little at a time, and get the dye to go down by tapping the cylinder against a surface. Just keep pouring and pouring allllll the way to the top, until you can’t fit any more in. 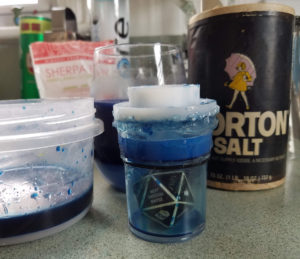 Now that you’ve got your dye in, pop the stopper back in and replace the 3 screws. Spin it around/flip it to make sure it’s not leaking anywhere. I’m pretty sure I went over the seam one more time with another round of epoxy to be triple-sure it wouldn’t leak.

Time to seal this bad boy and call it a day. I applied a generous (probably too generous) layer of epoxy on both halves of the 8 ball shell, stuck ‘em together, and let it sit for an hour to cure. Some epoxy oozed out from the sides, but I honestly didn’t give a shit and my boyfriend didn’t either. I’m sure you can just use less epoxy, but I was just too paranoid.

Congratulations! You now have yourself a custom Magic 8 Ball! Send pics and questions! Findagiftfor at gmail. 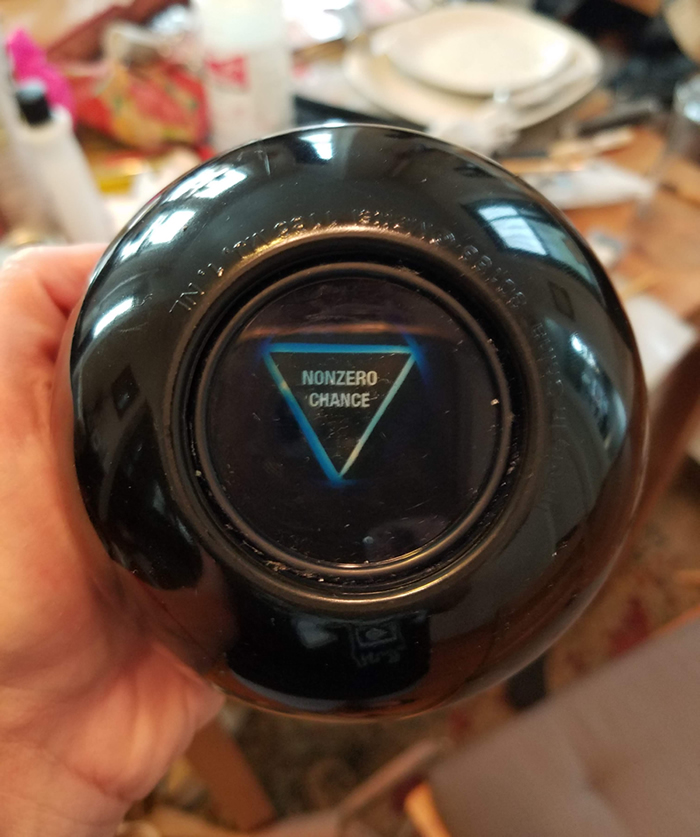 Items are added by hand. Prices may vary.

This page contains affiliate links. And as an Amazon Associate, I earn from qualifying purchases. To learn more, please read my disclosure statement.